THE HISTORY OF COMBERMERE

Playground on the Madawaska. Combermere was first named Dennison’s Bridge after Captain John Dennison, who first came to the area in 1854. John Dennison emigrated from England to Montreal in 1825. He took part in the Rebellion of 1837-38, earning himself the title of captain. From Montreal, he traveled up the Ottawa River accompanied by his two sons, John and Henry. They then ascended the Madawaska River for many miles landing at a spot which came to be known as Dennison’s Bridge. John’s daughter, Elizabeth Dennison, married John Hudson who had come out from England in 1878 and they took over the stopping places known as the Hudson House.

In 1880 the name of the village was changed to Combermere. No written record has been found, as to where the name actually came from. Some say it is named for a place in England, and some say that the son of Lord Combermere once visited this place. 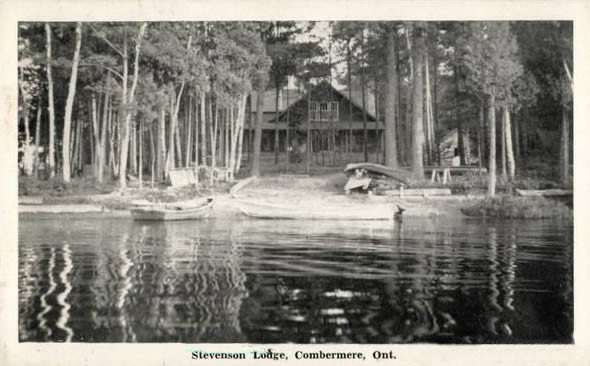 Daniel Johnson established the first general store in 1859 on the site where Valley Market operates today. Johnson owned a boat which ran to Barry’s Bay to pick up supplies, brought there by horse and wagon from Eganville and Renfrew.

Today, Combermere is a beautiful little community and still home to the Hudson House Restaurant. This historic house lost its owner, Caption John Hudson, when he drowned with the Mayflower, an ill-fated sternwheeler which sank in Kamaniskeg Lake in 1912.