THE HISTORY OF LUMBERING IN THE BANCROFT AREA

Not long after the arrival of the first settlers in the Bancroft district, lumber companies became interested in the vast forests of this area. In the summer of 1848, the lumberman Henry Franklin Bronson from Upper New York State made his first prospecting tour into Canada. He explored the Ottawa Valley, getting as far as Bytown, which would later be renamed Ottawa and become the capital of the Dominion of Canada.

Henry Bronson was excited by what he had found in Canada. He was no novice to the lumber industry. At that time he was already running large lumber operations in the valley of the Upper Hudson, together with his partner and long-time mentor, John J. Harris. However, it was clear that the supply of pines along the Hudson River was rapidly decreasing. In 1852 Bronson persuaded Harris to accompany him on a second trip to Canada. To both of them the seemingly inexhaustible supply of pine, hemlock and other valuable woods was irresistible. However, the lumber would be of little use unless they found ways to transport it to the lumber mills. Railways did not yet exist; waterways were the only possible route. The partners carefully investigated the Ottawa River with its tributaries and large lakes and found them to be suitable for the driving of timber logs.
This opinion ran contrary to the one held by previous lumber prospectors, who had come from Maine and other States. They had declared these waterways as unmanageable for the purpose of running logs. Yet Harris and Bronson trusted their own judgment, and, undeterred, they began to build their saw mill at Bytown (Ottawa) the following year. In 1855 they cut their first lumber in Canada. After Harris’s retirement nine years later, Henry F. Bronson continued the successful lumbering business and thus became a pioneer manufacturer of sawn lumber in Ontario. Eventually his son, Erskine H. Bronson took over the business and partnered with Abijah Weston, also of New York State, who owned various successful lumber businesses in the United States. They formed the Bronson & Weston Lumber Company and built a headquarters in Dungannon Township, eight miles east of present-day Bancroft. Later the original Bronson & Weston headquarters were moved to a new building, which functions today as the North Hastings Heritage Museum.

Mr. Archibald Riddle was one of the Bronson & Weston Company’s first superintendents. The Company recruited loggers from the Ottawa Valley and even Quebec province. Some Bancroft men who could get away from home for the winter were hired as well. The logging camps were strategically located in the centre of the cutting areas. The Company had much experience in logging and organized their men well. Despite that, felling the trees with axes and saws was hard, dangerous work, and accidents occurred frequently. Hundreds of teams of horses were brought in as well. They pulled the logs onto the ice-covered lake surfaces. 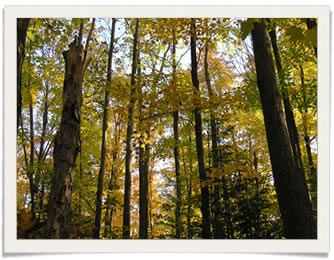 The timber was first cleared from the easier-to-reach districts. Later the loggers moved deeper and deeper into the bush. Other lumber companies followed Bronson & Weston. The Rathburn Lumber Company, the Eddy Company and the Gilmour Lumber Company went after the wealth in the forests of the Bancroft district. The Rathburn Company built a headquarters near Burnt Lake. It was called the Bruton farm. Lumber operations along the York River went as far upstream as Sand Lake, the source of the river.

In the spring when the melting snow and ice swelled the rivers and lakes, the timber had to be transported to the saw mills. The lumbermen had to dam lakes and then release the water in order to get the floating logs to move over shallow, rocky areas. In other places they built chutes to direct the logs away from rapids and falls, where the logs tended to jam. From Sand Lake the logs would float through Byers down the York, through Elephant and Baptiste, over High Falls, past the Crooked and Flat Rapids, and finally reach Bancroft. The logs almost always jammed in the Bancroft Rapids. Once the jam was undone, the Lavalley Rapids, the Egan Chutes and the Farm Chutes presented new challenges to the log drivers. By the time the logs reached the Madawaska River, the water level was too low to continue the log drive. The window of opportunity had closed. Another winter passed, and the high water of the next spring carried the logs over more falls and rapids to Arnprior, then down the Ottawa River to the Capital where the saw mills were waiting. Some log drives even went as far as Montreal.

Having spent the whole winter in the lumber camp, the lumbermen were ecstatic when they reached Bancroft, the first point of civilization on their long, difficult drive. They rushed into the bars and celebrated wildly. Fights would break out between the inebriated river men, especially if rival gangs met up accidentally in a hotel. The lumber companies lost hundreds of man-hours in town. It is said that one year the companies offered a large amount of money to the Bancroft hotels to get them to keep their doors closed while the log drive went through town. However, it appears that no deal was ever reached. Probably the hotel owners feared that closed doors would be just a small obstacle to overcome for the determined, thirsty lumbermen. 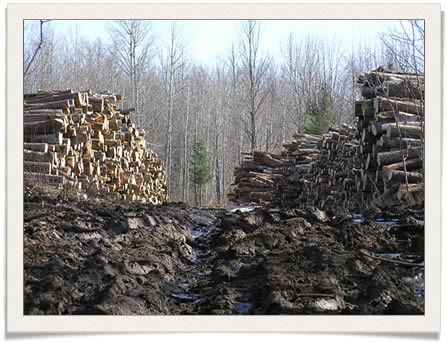 The work of a log driver was exceptionally dangerous. There was many a drowning and frequent accidents. Each gang usually had one expert river man whose job it was to undo any jams. With ropes tied to his body, he would have to go among the logs, piled up usually in dangerous white water, to find the one log that had caused the jam. Once he had managed to dislodge the log and thus break the jam, he would run for his life to the shore. If he did not make it, his fellow loggers might succeed in pulling him ashore by the ropes – either dead or alive. If he did make it safely back to shore, his rewards were a bonus from the lumber company and some free drinks from his fellow drivers.

The people of Bancroft got to watch such an incident where two river men had volunteered to break a jam in the Bancroft Rapids. They were John Bernard, a Native, and Mick Sabourin. When they approached the pileup, the logs gave way on their own, and both men were swept away. They vanished from sight. Sabourin, a non-swimmer, was washed up on the shore unharmed, but John Bernard, a swimmer, was likely knocked unconscious by the logs. He drowned in the York River.

Customarily, the dead river men were buried near the place where they had died. Their boots were used to mark the grave. One river driver was buried right in Bancroft at the junction of Hastings and Bridge streets. Undoubtedly, the river drivers were a brave, tough, adventurous lot.

Eventually the railroad became a more efficient means of transportation for the timber from the Bancroft district. In the harvested forests some new trees were planted to be felled later as a second growth; and lumbering continued in the area. Yet the harvest was no longer rich enough for the big lumber companies. They left the area, one by one.

Today the forests in the Bancroft area are no longer exploited for profit without any thought of preserving them for future generations. The Bancroft Area Forest Industry Association (BAFIA) is a strong advocate of sustainable forestry practices. Its members are mainly small, family-owned businesses, such as sawmill operators, loggers, forest technicians and woodlot owners. They work on both crown and private lands and keep a vigil over the precious forests of the Bancroft district.