This road was begun in 1854 as part of a network of “Colonization Roads” planned by the government to open the southern fringe of the Precambrian Shield to settlement. Under the supervision of Robert Bird, construction began at the northern boundary of Madoc Township and within a year 40 miles of summer road had been built northward to a point near present day Bancroft. The road, when completed, was about 100 miles in length. The free-grant lots along its course were quickly taken up but poor soil prevented the development of a prosperous agricultural settlement. When the decline of lumbering in the region removed a market for produce and a source of employment, the settlers abandoned their farms and the road fell into disuse. 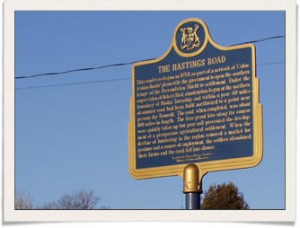 Monck Road (County Road 45, formerly Hwy 503), which runs through the Bancroft district, is one of the oldest provincial roads north of Toronto. It has a rich history. From Lake Couchiching Road it extends 150 kilometres east to Hastings Road. Monck Road’s original purpose was twofold; firstly, that of opening up a wilderness area to settlement; secondly, it was intended to serve as an alternate military route from the upper Great Lakes to the Ottawa Valley.  more on the Monck Road… 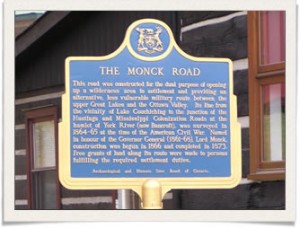 The Peterson Road was named after Joseph S. Peterson, a surveyor who determined its route in this region. Constructed 1858-1863 at a cost of some $39,000, it stretched about 114 miles between the Muskoka and Opeongo Roads and formed part of a system of government colonization routes built to open up the southern region of the Precambrian Shield. Poor soil disappointed hopes of large-scale agricultural settlement along this road both on government “free-grant” lots and on the lands of the Canadian land and Emigration Company. Though portions of the route were overgrown by the 1870?s, the Maynooth-Combermere section aided lumbering, and now contributes to the development of an important vacation area. 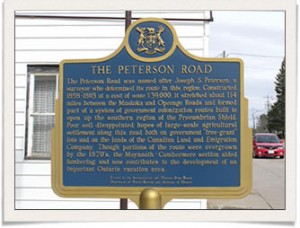 The Mississippi Colonization Road (or Snow Road),  runs east from Bancroft at the junction of Hastings Road and Monck Road. This road crisscrosses today’s Highway 28. Named after John A Snow, who surveyed a road in 1857 from the Mississippi River in Lanark County to the Hastings Road at what is now Bancroft. John Snow was later sent to Manitoba in 1859 to survey Rupert’s Land of the Hudson’s Bay Company.

Named for James Maxwell one of the first homesteaders to farm free land grants in the area. He had 25 children.