The Richardson Mine
The Richardson Mine is the site of Ontario’s first gold mine.  Gold was first discovered here by Marcus Herbert Powell in 1866 on the farm of John Richardson.  The mine went into production the next year, and the town of Eldorado was founded.  Although the Richardson mine ceased operation in 1869, not long after it opened, it spurred a small gold rush to the area and a number of other small mines were established, including Deloro, Gilmour, Cordova, Feigle, Bannockburn and Golden Fleece.  These mines, like the Richardson Mine, did not hold vast amounts of gold.  Gold found at the Richardson Mine came in the form of leaves, sheets, and nuggets.  The largest gold nugget was the size of a butternut (similar to a walnut).  They also found Pyrite here.

To commemorate the first gold mine in Ontario, the Archeological and Historical Sites Board of Ontario installed a historical plaque at the corner of Hwy 62 and John Street in the village of Eldorado. There are a few original buildings near by that serve as a reminder of a time long past. 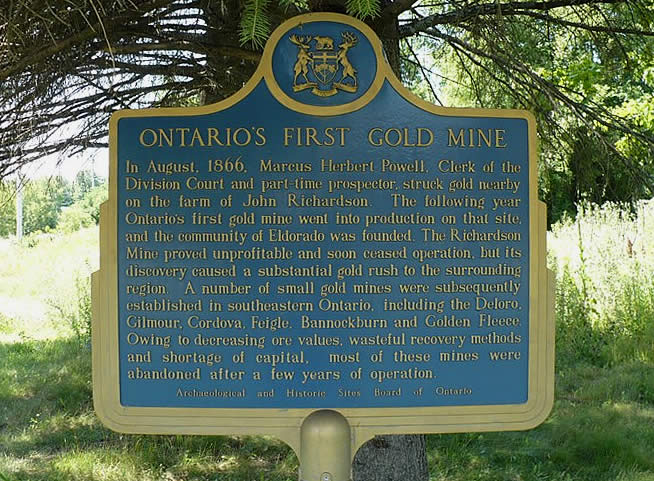